For many years there has been a group of keen golfers within the Chanctonbury club. We organise occasional summer golfing trips to France; friendly matches with other local Probus Clubs; an Inter Club individual competition for the 'Alistair McKenzie Trophy'; and two annual competitions for our club members for the 'Roy Ward' and the 'Doug Charles' trophies. These three pieces of silverware were given in memory of long standing club colleagues. If you have any interest please contact our Golf Co-ordinator Alan Jeffs

25 February 2020 - Club Golf Co-ordinator Alan Jeffs held a meeting to agree the Golf programme for this year - evebts and dates (where known) are shown on the Diary webpage. For further details please contac Alan

We completed our season of monthly golfing competitions this week – a little later in the year than normal due to delays created in the Spring by Covid.

Interestingly golf has been one of the few sporting activities that has seen an increase in levels of participation this year as more people have had increased leisure time by way of either being furloughed or not having to commute to work, and, of course, golf is amenable to social distancing, especially if one’s drive is a little wayward!.

This last game was held at Singing Hills golf course at Hassocks – a pretty course but prone to bad weather as it is on clay soil. 7 of us played and we were pleased to see Simon Powlson back in action after his knee operation, albeit somewhat recklessly as he drove his buggy at speed across the soft ground. Winner of the day was Alan Jeffs - just ahead of the pack.

Annual prizes were presented to Michael Carroll as he retained the Doug Charles trophy for the best aggregate score for the year, and to Mike Brett, winner of the Roy Ward trophy awarded on a points basis for totalling 3 team wins out of 4.

The Inter Probus competition was not played this year so we retain the team “Hackers Trophy” with John Howard continuing with the task of polishing the individual trophy until 2021!

Earlier this autumn Alan Jeffs challenged our old rivals, the South Downs Probus, to a members and partners 2 leg match-play pairs competition. We lost the first leg 2.5:3.5 in September but hope to reverse the score this coming Friday at Cowdray Park.

This is a bit of fun as partners and guests can play, however pride is at stake so we will do our best to win. If the competition is repeated next year we will see if there are more players and/or partners (or offspring?) willing to give it a go!

Simon Powlson takes over as golf secretary for 2021 after Alan Jeffs takes a step back after 5 years in the job - Good luck Simon!!

Golf has been one of the few sports that have been able to continue, in some form or other, through the covid ( I don’t believe it deserves a capital C!) crisis.

The golfers amongst us have been able to continue through the summer with our monthly meet albeit without the post-match feast.

The Inter Probus competition, due to be held in August, was cancelled early in the season, so Chanctonbury Probus remain holders of the “Hackers Trophy” by default.

So as not to rest on our Laurels we challenged our closest rivals at South Downs Probus to our own version of the Ryder Cup match-play competition.

The “home leg” was played at  Hill Barn Golf Course, Worthing, on Friday 25th September in what proved to be windy but dry weather.

Our team of 12, made up of members, wives and guests formed 6 pairs selected by Captain of the day John Howard. We had mixed fortunes losing 3 matches, winning 2 and drawing one.

We lost the battle but will still win the war if we can reverse our fortunes on the second leg to be held in October. Rory and Justin have been asked to play for us!!

In the meantime we have two more rounds to play for our own trophy so golf continues into the autumn, weather permitting.

Organiser Stuart Arnold reported on this golf event as follows:-

We had the second round of the Doug Charles Trophy at the Hill Barn course in Worthing on Tuesday  4th August organised by Stuart. Six of us played  with one guest on a beautiful sunny day having first supported the governments “Eat out to help out” initiative by having a great breakfast before the round. Suitably fed and watered we then set about the serious matter of the golf taking full advantage of the more forgiving nature of the wider fairways at Hill Barn. We did still manage to explore the wilder parts of the course and enjoyed the sand between our toes in some of the Bunkers. We had views from the Isle of Wight round to the Severn Sisters from the elevated position of the 15th and 16th fairways having first scaled ‘cardiac hill’ as it is affectionally known to get to the 15th.  So after a six mile walk and 50 floors of ascent (according to my trusty Garmin ‘smart’ watch) the honours In the end went to Stuart who narrowly pipped Mike Brett to win the individual prize and the three ball of Mike Brett, Alan and John Howard were the best scoring team. We now look forward to the end of September for the next round at Horsham. 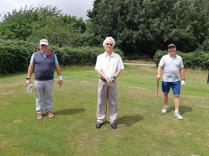 Organiser Simon Powlson reported on this golf event as follows:-

‘We had the first round of the Doug Charles Trophy at the Chichester Cathedral course on Wednesday 8th July. Seven of us played under threatening skies, which fortunately never delivered the rain they promised. The same promise but failure to deliver was true of our golfing talents. In the absence of rain we regularly sought out water in the myriad of brooks and ponds that make the course so different and challenging. At the end Simon narrowly pipped Michael Carrol to win the individual prize and the four ball of Laki, Mike Brett, Michael Carroll and Simon won the team prize.

"Chanctonbury Colleagues together with guests and friends from other Probus affiliates made up a round dozen of players who were blessed with good weather and enjoyed one of the best courses in the South of England, namely the  premier Worthing  course fashioned by the famous golf course designer Harry Colt. Feedback over a very acceptable lunch was that whilst the course proved a challenging test of golf, everyone was very impressed by both its layout and condition, and would be interested to return at a future date."

Organiser Simon Powlson reported on this golf event as follows:-

I forgot to take any photos but there were only 6 of us!

Next and final match is at Worthing on 23 September. I think we have over a dozen with guests" 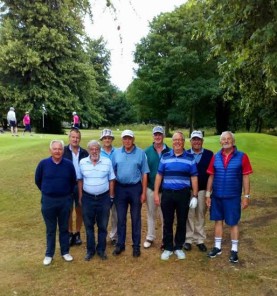 Alan Jeffs reported that a good day was enjoyed by the 9 people in this photo - including Mikes son in law.

The next Club match at Hill Barn in Worthing on Thursday 15th August.

Originally held just an individual friendly competition amongst members of Chanctonbury and South Downs Probus groups this has been expanded in the last few years to include a team competition open to all local Probus groups for men and women, including partners.

This year 4 teams and a total of 24 individuals competed.

Chanctonbury Probus pipped the other teams to regain the team trophy in fine style.

As well the individual trophy was lifted by John Howard (not for the first time). Simon Powlson and Mike Brett made up the winning team.

Numbers were down this year, mainly due to many of our golfing brethren taking holidays so consideration is being given to moving next year’s event to the month of August when golf courses are quieter and most senior citizens avoid the holiday rush.

As well more Probus groups will be encouraged to participate.

Chanctonbury Probus members participate in many sporting activities just for fun. As well as golf we turn our hand to ten pin bowling, and croquet, and even curling.

Two new members of our Probus Club have just taken up golfing and will, we hope, soon be participating in the monthly summer golf meetings.

4 February 2019 - To prepare for 2019, Golf Co-ordinator Alan Jeffs held a meeting at his home to plan the detailsof the Club's activities for this year

This Inter Local Probus Clubs golf day for 2018, was organised this year by the Billingshurst and District Probus Club at the Horsham Golf Club on Monday 4th June.

To aid planning for 2018 Alan co-ordinated a meeting of members with an interest in golf on 5th February 2018 to agree the details and organisers of the internal golfing events that will lead to the presentation of the Chanctonbury Probus Club 'Roy Ward' and 'Doug Charles' trophies.

The Club secretary emailed all active golfers in our Club with a set of notes on what is planned for this year. Details of the events are also shown on the 'Club Diary' webpage (in green text). The Doug Charles Trophy competition will this year be held as a 9 hole competition for members (and wives/partners) to try to attract as many older golfers as possible. 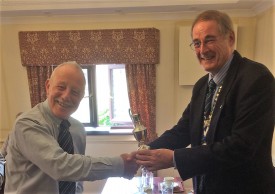 The Club golfers took to the hills on 15 June 2017 by competing in the Alistair McKenzie Trophy Competition. Superbly set up by John Keayes, a field of 28 players from 6 local Probus Clubs (Arundel, Billingshurst, Chanctonbury, South Downs, Steyning and West Chiltington) strived to make the cut as the stiff breeze of the Hill Barn course at Worthing sought to take control of the ball. A gift of an ice cream was on offer at the halfway point thanks to the generosity of our own Alan Jeffs! Was this a plot to gain some advantage?

Prizes for nearest the pin on the 5th and 11th holes and the longest drive on the 9th, were at stake as well as the ultimate accolade of “Inter Probus Golfer 2017” to add to your CV!

The results were as follows.

Nearest the pin on 5th was Howard True of Billingshurst.

The longest drive on the 9th was taken by our own John Howard.

Nearest the pin on the 11th was by John Isaacs from South Downs.

The overall winner of the Competition with 38 points and now holder of the 'Alistair McKenzie Trophy' is Chanctonbury Club's  Hugh McLeod. His victory was a narrow one, winning on countback by scoring 18 points on the back 9 holes as opposed to the 17 points scored by Tony Dell of South Downs.  John Howard finished a creditable third on 34 points. See above photo of Chairman Rob Golding presenting Hugh McLeod with the 'Alistair McKenzie Trophy' at the July 2017 Club Lunch Meeting

Mike Brett the Competition Manager for the day, in the unavoidable  absence of John Keayes, presented a special prize to Cliff Mansell from Steyning who played the 18 holes in 4 hours at the age of 85!!

The day was rounded of with a meal of scampi and chips at the Club and concluded by Mike thanking all those who took part and asking that the other Clubs consider hosting the event in the future.

A final footnote - Alistair McKenzie was a founder member of our Club, a keen golfer, his family presented the trophy to the Club in his memory.

This year's Roy Ward Trophy golf matches for Club Members were held in Sussex (not in France as in recent years) as a result, the Doug Charles Trophy competition was combined with the final Roy Ward match on Thursday 21st Sptember 2017 at the Hill Barn Golf Course in Worthing.

There were four playing dates for thie Roy Ward Trophy this year. 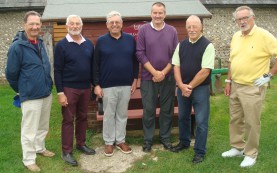 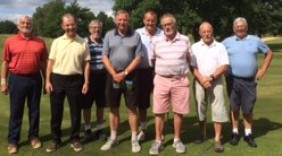 This photo shows Paul, David and John Howard all in the same bunker at one stage! For some of us the lunch was better than the golf!